Home » Why You Need To Stop Pre-Washing Your Dishes

Why You Need To Stop Pre-Washing Your Dishes

If you’re lucky enough to own a dishwasher (or are thinking of buying one), then you’ll likely be thankful that a lot of the hard work is done for you. But there is probably a bit of pre-washing involved if the plates are particularly dirty so that they will come out cleaner.

Well, that isn’t actually how it works.

Scraping food off the plates before they go anywhere near the dishwasher is essential for obvious reasons. You don’t want clogged pipes. But it actually helps if they are a little grubby:

Detergent may not work as well 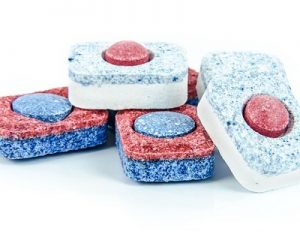 Dishwasher tabs are expensive, so you want to ensure they can do their job fully

The cleaner which you put in the dishwasher is designed to remove any remaining food particles from your cutlery. It does this by clinging on to the particles. But if there are none there, then they have nothing to latch on to.

This can mean that your plates don’t get the attention they need, as the detergent could just move through the washer without attaching to the plates. So they may look cleaner, but looks can be deceiving.

It could mean a less thorough clean

It isn’t just the detergent which may not be as effective – the pre-rinse could also get confused. This first cycle detects the food which remains and can usually be washed off by hand. Then the cycles which follow are catered towards the food which is left.

So, the pre-rinse may remove the tomato sauce left from your lasagne dish, and tell the dishwasher that some burnt on cheese or pasta remains. But if the pre-rinse doesn’t remove any food because it is already gone, then it’ll tell the later cycles that there isn’t much need to bother because there is nothing there. Which results in a very short cycle.

You are wasting water

Because they are designed to actually clean dishes, pre-cleaning is just a waste of water. A dishwasher may use around 5 gallons of water, but a hand washer could use at least 8.

Think about the last time you washed by hand. You do a few items; then the water gets dirty, so you have to refill it. Or, it may get a bit cold, so you need to top it up. Then there is rinsing the glasses and cutlery under some cold water to stop the bubbles making a mark.

Doing this, then using the dishwasher, isn’t only a waste of water but also time. You could be using at least twice as much as you need overall.

Your dishwasher is cleverer than you think

Many of the modern dishwasher models can detect the level of dirtiness of your dishes, so they can target the water and detergent towards the areas which need it and also adjust temperature and time.

This could also save you some water – they could only use as much as necessary. Plus, the temperature of the water in a dishwasher is more than your hands can handle, meaning grease and dirt is more likely to be busted.

“My parents always told me to pre-rinse!”, you say. Well, your relatively new dishwasher is likely a lot more advanced than theirs was.

But My Plates Are Still Coming Out Dirty!

If your dishes aren’t sparkling clean, then it may not be the fault of the dishwasher as such, or the fact you didn’t pre-rinse. Check the detergent you are using, plus the rinse aid and salt. Too much or too little of each could mean streaky dishes, and it may be worth spending a bit more on the detergent.

TIP: Having a dishwasher in place which has a high energy rating and is packed with loads of washing settings could help not only to get your dishes sparkling but also save you some money off your bills.