A microwave pressure cooker is an excellent addition to your kitchen if you want to make your dinner and other meals faster and more easily. You just pour in the food and stock, tap a few buttons and leave the appliance alone to cook the food.

If you have been using the regular pressure cooker, you’ll have a better experience with a microwave pressure cooker since it not only cooks faster but is safer and easier to use.

This article explores how a microwave pressure cooker works to make it so easy for you to put ready food on the dinner table faster than using any other traditional cooking method.

What is a Microwave Pressure Cooker and How Does it Work?

Cooking food under pressure is one of the best methods to date. When you combine pressure cooking with microwave cooking, the result is a super-fast cooking technique that cooks up to 30% faster than traditional methods, such as boiling.

The special pressure cooker goes into the microwave and relies on it as the source of heat.

To cook your food in a microwave pressure cooker, you first open the lid and pour in the food items and the specified amount of water. Next, you replace the lid, and place the cooker or pot inside the microwave, then set it to cook for, say, 20 minutes.

A microwave pressure cooker uses the principle of heating water in a tightly sealed container to bring it to boil and cause pressure build-up.

Water and pressure thus become the strongholds of the microwave pressure cooker, with the added safety since the water remains put and doesn’t spill over or cause the pressure cooker to explode.

With microwave pressure cookers, unlike traditional pressure cookers, there is no heat-up time where the food heats up for about 20 minutes before it starts cooking. The elimination of the heat up time saves you time and gets meals on your table faster.

Once the water inside the pressure gets heated, it boils continuously and collects in the space above the food since it is not allowed to escape. The now trapped, hot water molecules increase the pressure inside the cooker.

At the boiling stage, all the heat energy within the setup goes into the boiling water. The temperature remains constant until all the water has boiled away. The basis here is that liquid water cannot attain a temperature higher than its boiling point. 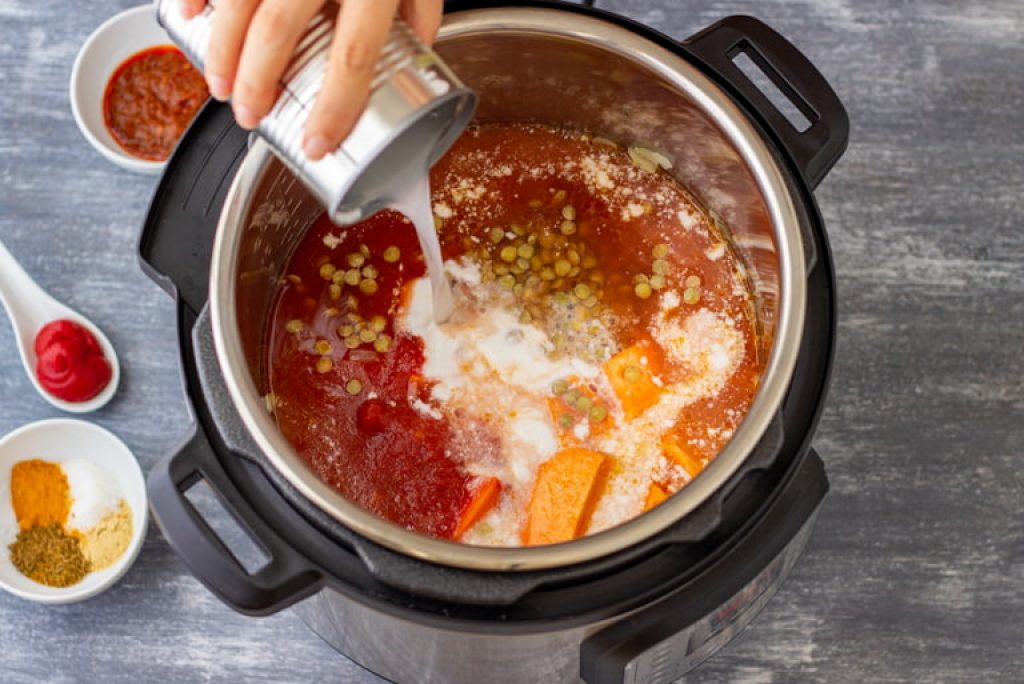 In a microwave pressure cooker, the surrounding pressure is even higher than in a traditional pot, whose water boils when the temperature reaches 212°F or 100°C at about 14.7 psi atmospheric pressure.

The good thing with a microwave pressure cooker is that the added pressure and higher temperatures result in more flavourful food, better retention of nutrients, and increased safety. As the cooking continues, the pot doesn’t go dry because the water remains trapped inside.

Negating the Effect of Atmospheric Pressure on Cooking Speeds

The idea of the pressure cooker is to beat the limiting effect of atmospheric pressure on cooking speeds. As atmospheric or air pressure reduces the higher you go above sea level, water boils at a lower temperature, which results in prolonged cooking time.

Undoubtedly, a microwave pressure cooker combines both ease and speed to help you place food faster on your dinner table.

The ease of use of the system is attributable to several factors.

First, the unique pressure cooker consists only of a few parts. It has the main pot, the lid, a stackable steaming plate, and a lid. You don’t need an electrical cable or cord, making it safer and ensuring portability is a breeze.

You can pour food directly into the bottom of the pot or on the stackable steaming plate.

The latter route is the best to take if you want to make it easier to remove the ready food from the pot. But you can use a non-scratch serving spoon to scoop out the food. If you are in a hurry, just pouring the food directly out of the pot will work as well.

Secondly, the pressure cooker has only a few moving parts. Other than the steaming plate pull-out, the lid is also removable and can be lifted off when pouring food into or out of the main pot.

The lid should have a strong locking mechanism to ensure the built-up pressure in the cooker doesn’t overwhelm it and escape or cause an explosion. 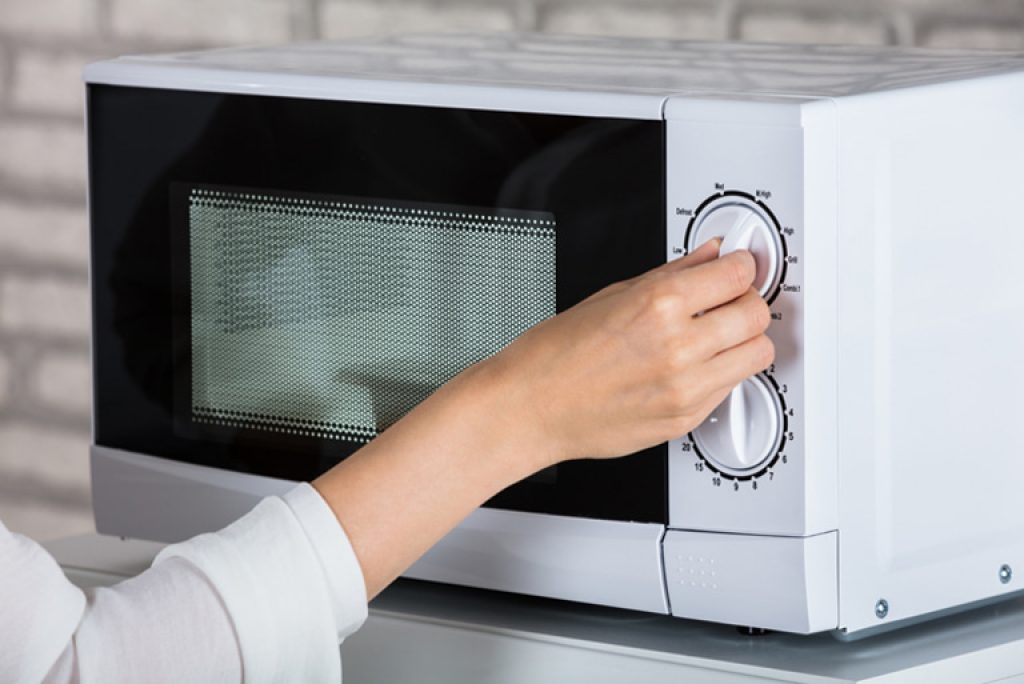 Taking out and replacing the lid is easy because there are marks or arrows on the lid and the pot to indicate which way the lid opens or closes and the point at which its locking mechanism is activated.

The microwave pressure cooker should also have a handle large enough for holding with the hands when lifting the cooker into or out of the microwave. However, the handle should not be too long as to hit the interior walls of the microwave.

If you lift the cooker with bare hands a few moments after the cooking duration, you risk burning your fingers when you touch the pot. You can wait for a few minutes for the system to cool down a bit before you take out the pot.

Steam Expulsion and Pressure Safety in a Microwave Pressure Cooker

In traditional or ordinary pressure cookers, explosions due to extreme pressure build-up are a common kitchen phenomenon that undermines your safety.

Seeing that traditional pressure cookers are stovetop or electric, such explosions can be devastating not only for you but for others around you as well.

Many people have suffered skin burns when a pressure cooker exploded, or they accidentally came into contact with hot, high-pressure steam jets out of the cooker.

A microwave pressure cooker eliminates the risk of accidental explosions or steam burns in two ways. The water inside the pot remains trapped during the cooking process since the internal temperatures do not rise higher than the boiling point.

Secondly, the microwave pressure cooker has mechanisms for letting out any steam or water vapour once you take out the pot to lower the pressure inside.

A removable screen on the inside of the lid allows you to manage steam let off. The screen protects the pressure valve from getting clogged. Once the pressure inside the pot exceeds four pounds, the valve allows some of the trapped steam to escape.

When you take out the screen, you leave a passage for any steam to escape through the port at that point on the lid, reducing your cooker to the working mechanism of an ordinary pressure cooker that allows for continuous steam let-off.

However, it’s not advisable to remove the screen and have steam escape into the microwave (unless the valve automatically does so.)  A microwave has components prone to malfunctioning when exposed to excessive steam.

Other than the screen, the microwave pressure cooker should have a pressure indicator on the lid to let you know if there is pressure inside the pot or not. 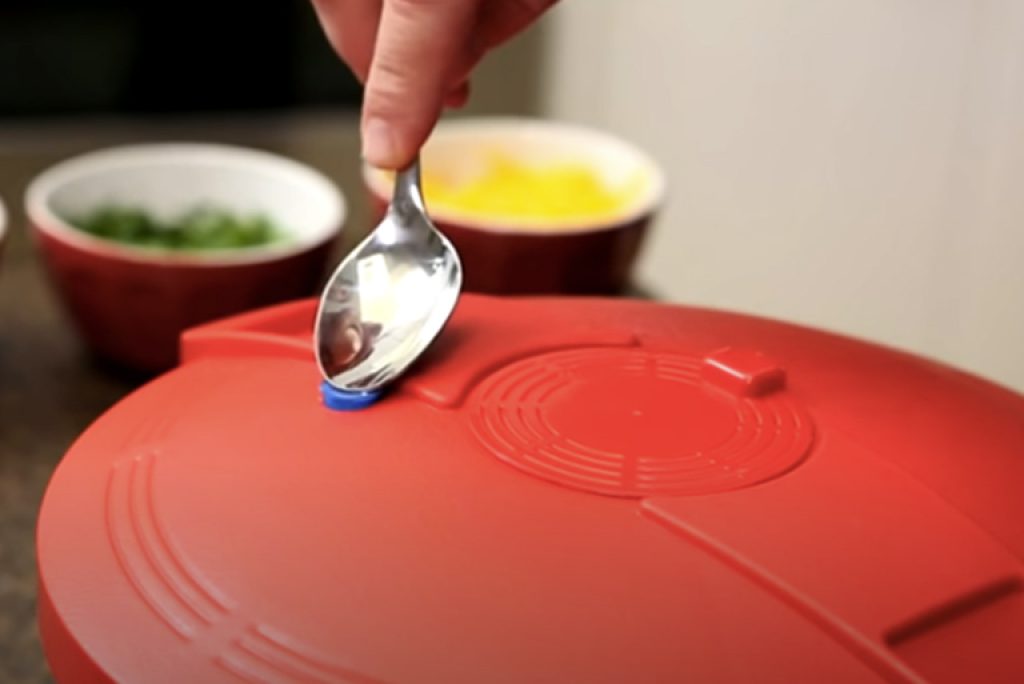 When there is pressure in the cooker, the indicator (usually a round rubber tube) rises a few millimetres above the top surface of the lid. You can either wait for the pressure to go down on its own or release it manually by partly pressing down the indicator with a spoon.

When there is no pressure in the pot, the pressure indicator lies flush with the lid surface, indicating that you can now safely open the lid to scoop and enjoy your meal.

For a detailed overview of how a microwave pressure cooker works, be sure to refer to the video below.

With a microwave pressure cooker, you are looking to cook your food (grains, vegetables, meat, fruits, pasta, seafood, among others) at temperatures higher than 212°F.

The above-212°F threshold is achievable because the cooker builds up more pressure such that the cooking water boils at a higher temperature and the food cooks faster.

Take the bull by the horns now and get yourself the even faster, safer, and easier-to-use microwave pressure cooker!

Countertop Verses Under Sink Water Filter System: What is the Better Option?

Small Kettle Buying Guide- How to Choose Your New Kettle