Nail Gun Reviews in the UK: Which Electric Nail Gun Is the Best?

Whether you are a Do-it-Yourself (DIY) enthusiast working on an around-the-home project or an on-the-move craftsman, an electric nail gun comes in handy for several uses. Since using a hammer when you have to drive in hundreds of nails is hectic, you can opt for an electric nail gun.

You can use an electric nail gun to fasten things together with nails in projects like roof repair, making new wooden floors, fence building, framing a room or home, and installing baseboards.

Despite the excellent solution that an electric nail gun is, choosing the best on the market can prove a challenge if you don’t know the various types and what to look for in a nailer. This article explores the best electric nail guns in the UK for your DIY or handyman needs.

What to Look for in an Electric Nail Gun

When you are shopping for the best electric nail gun, you must consider the following crucial aspects to ensure you pick the one that will best serve your needs.

Also called nailers, nail guns are an excellent preference for tiresome hammers for driving nails to fasten things like wood together. An electric nail gun uses electrical power to eject the nails.

Corded electric nailers have a power cable or cord that connects them to a mains electricity source with a voltage magnitude of 110 or 120. They are less expensive than cordless nailers.

The most significant advantage of a corded electric gun is that you can always enjoy uninterrupted work as long as the power supply is still on. However, the cord limits portability, meaning you have to use it in a small area or use an extension cord for further coverage.

You will find corded nailers an excellent option for home-based projects, but they are becoming less common and finding one might be a challenge.

On the other hand, a cordless electric nail gun, also known as a battery-powered nail gun, becomes an ideal solution because of its portability. It uses a rechargeable Lithium-ion battery as the power source.

Because of their portable nature and the use of batteries, cordless electric nail guns are more expensive than their corded counterparts. However, they have also become trendy and are taking over the industry, with most handypersons or artisans choosing them for their on-the-move jobs.

Electric nail guns may also be classified based on their function into brad nailers, framing nail guns, or finishing nailers. 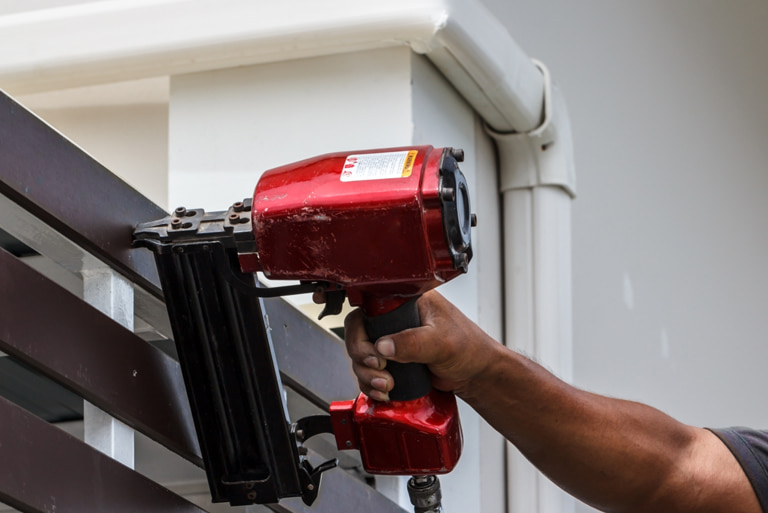 Brad nailers are used for several applications such as repair, light construction, and furniture building. They shoot brads or nails of up to two inches in length and either 18 or 20 gauge, with 18-gauge brad nailers being the most favourite among DIY enthusiasts.

Framing nail guns shoot framing nails or penny nails that are usually 3-1/2 inches long. You can choose this type for your tougher fastening needs, such as large fences and framing large objects like a room or entire house.

Finish nailers shoot finish nails of up to 2-1/2 inches in length and either 15 or 16 gauge. You can use them for jobs like crown moulding or installing baseboards.

Note that you might have to choose two or three different types based on what you want to do with the nailer.

As seen above, you must consider how your electric nail gun will be powered when in use. If you are working on a project at home where mains electricity is available, you can go for the corded nailer.

If you need to work where mains electricity is unavailable, the cordless or battery-powered electric nail gun will be the better bet. Be sure to go with this option if you travel a lot to different locations.

An electric nail gun can use either the bump or the sequential firing mechanism. Some use both.

With the bump mode, also known as the contact mechanism, the nail gun has to be in direct contact with the surface, and then you have to hold the trigger down all the time. While this makes it the faster option, safety is reduced.

The sequential mechanism relies on a two-step firing procedure where you pull the trigger to eject every nail once you place the gun’s nose against the object surface to be fastened. Although a safer method, it is slow and tiresome since your hand works more in pulling the trigger repeatedly.

Other Factors to Consider When Choosing an Electric Nail Gun

Other than the above three major factors, you might also consider the following two aspects:

Which Electric Nail Gun is the Best in the UK?

Once you know the various types and what to look for in an electric nail gun, it’s time to check the market for the one that will serve you best. Since there is no one-type-fits-all nailer, you might have to buy more than one, depending on the job at hand.

Read on to find a favourite electric nail gun from our carefully selected options.

Tacwise is among the most widely recognized tools brands globally, with a host of handy implements for artisans and DIYers.

The 400ELS electric nailer weighs just one kilogram and is thus a suitable option if you work with it for a long time or in high places.

The nail gun is corded and has an angled magazine that makes it easy to access areas that would otherwise be difficult to reach. It has a capacity of 100 and fires 18-gauge brad nails of between 15 and 40mm in length.

For ease of storage and safety, the gun comes in a handy carry case so you don’t have to carry it directly against your body.

The Ryobi Airstrike nailer shoots 18-gauge brad nails of 15 to 50mm in length. One thing not to like about this cordless electric nail gun is that it comes as a bare tool, meaning you have to buy the charger and the battery separately to supply the required 18-volt direct current (DC) power.

However, it has three features that you will like. First, it has a low nail indicator that shows when you need to reload so you don’t have to count after firing each nail. Secondly, it has a dry-fire lock system that prevents firing when the tool is empty.

The gun allows you to switch between contact mode for rapid nailing and sequential mode for accuracy and extra safety to top up the above two aspects.

Although a bit on the heavier side at 8.12 kilograms, the Milwaukee 18V cordless framing nailer comes in handy when you are working with longer framing nails of between 50 and 90mm and nail size between 2.9 and 3.3mm.

Like its Ryobi Airstrike nailer counterpart, it doesn’t come with a battery, which you have to buy separately. However, you will like its adjustability since you can choose the accuracy you want between speed or shooting.

The gun also has depth adjustment to ensure the nails you fire into the wood remain hidden and invisible. Once you are out of nails, the trigger lock engages so that the gun stops firing.

The angled magazine allows for easy access to parts that are hard to reach. One thing to love about this framing nailer is that it has an inbuilt LED light that illuminates the surface to ensure you drive the nails in the appropriate locations or spots.

Dewalt is known worldwide for its high-quality tools, and the DCN660N framing electric nail gun is a unique addition to their list. Unfortunately, it comes as a bare unit, meaning that you have to buy the battery separately for providing the required 18-volt power.

Due to its lightweight nature at only 900 grams, you will fall in love with this implement if you work long hours or have to climb heights to finish your job.

The dual firing mechanism allows you to switch between the sequential mode for precision and the bump actuation mode for a speed of up to four nails shot per second. To improve safety at such high speeds, the gun has a trigger and contact trip lock that prevent accidental discharges.

The gun also has a dry fire lockout so it doesn’t shoot when there are no nails in the magazine. You can adjust the depth easily using the handy thumb wheel depth adjuster.

To avoid possible confusion, it’s worth noting that you may now find some Hitachi tools named Hitachi Hikoki. The cordless 4.7-kilogram Hitachi NT65GB framing nail gun is an excellent addition to your toolkit. It comes with two rechargeable Lithium-ion batteries and a 60-minute charger.

Among the other notable features of the gun include a dry fire lockout system, belt hook, and depth adjustability. The gun also comes with two hex wrenches, lubricating oil, a carrying case, safety glasses, and a nose cap.

You can fire 16-gauge nails between 32 and 65mm from the 100-capacity nail magazine, which is advantageous because you don’t have to stop more often to reload the gun. The one thing you might dislike about this gun is that it is a little heavy and might tire you out soon.

The plastic construction of the Paslode IM65 electric nail gun should not deceive you. The gun doubles up as a finish and brad nailer as it has a short brad kit for brad nails between 16 and 25mm in length.

You can use this Paslode gun for finishing work on dense MDF and softwoods. Its lightweight nature makes it possible for the user to work in tight spaces without suffering the fatigue that comes with using a heavy nail gun.

The included Lithium battery charges fast and can deliver up to 10,000 nail shots per recharge.

Included in the package will be a battery, charger, Allen key, impulse lubricant, high-impact carry case, safety glasses, cleaning solution, and a handy instruction manual. All these extras ensure that you don’t incur extra costs or spend any more time sourcing items to accompany the tool.

Electric nail guns are safe tools for everyday use. However, they can be a risk to you and others around you if used the wrong way. The following are some crucial safety measures to observe when using an electric nail gun:

We trust that, by now, you have picked your favourite electric nail gun from our carefully considered list.

Finding the best electric nailer doesn’t have to be a pain anymore once you know that you should narrow your choices guided by the type of the gun, its firing system, weight, nail capacity, and kind of power source.

Be sure to observe the above safety measures to ensure you and your workmates are fully safe working with electric nail guns.

Tags: Nail Gun Reviews in the UKWhich Electric Nail Gun Is the Best