Amazon has announced a host of new products for their Fire TV ecosystem at IFA 2019 in Berlin, boosting the lead they have over the hands-free voice control market.

The highlight? A second-generation Fire TV Cube, seen as ‘the most powerful TV streaming device to date’. And the good news is that it is coming right to the UK.

If you’re wondering why you missed the first generation of the Cube, it is because it simply wasn’t released here in the UK. It was an item only for the US market. But due to the popularity of the product, it is now launching on this side of the pond. And we have an inkling it will be replacing many of those Fire TV Sticks out there.

You will still be able to access Netflix, YouTube, ITV, Channel 4, Channel 5 and a whole host of other apps through the Cube, but it combines smart speaker technology too. Don’t worry – despite the name, it is actually very small, so you’ll barely notice it is there.

It is the 5 year anniversary of Fire TV, and they are sure celebrating it in style… 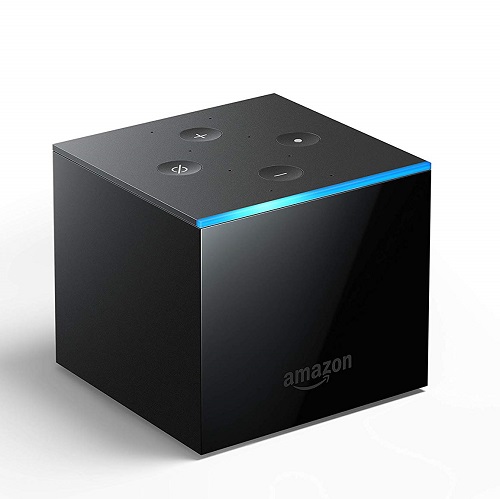 How Is The Cube Different To The Amazon Fire TV Stick?

You still get TV and device control with an Alexa Voice Remote (2nd gen.), as well as access to catch up TV, online streaming platforms and music services. You can also connect the Cube to the internet via Wi-Fi or Ethernet, depending on factors such as broadband speeds and the layout of your room.

But the Cube is a huge improvement on the Fire Sticks, too, as well as giving you access to the clever Alexa voice assistant without the need for the remote.

A Hexa-Core processor, instead of Quad-Core, means a faster and smoother experience with the ability to handle everything you throw at it. 16 GB of storage gives you tons of room for all your apps and extras such as pictures and Skills, as opposed to 8 GB.

You get far-field voice control of Fire TV, so you can ask Alexa to turn over to a certain film or service or even reduce the volume, which is perfect if you don’t want to move a single muscle because you’re too comfortable. While some of the later Fire Stick remotes had Alexa built in, you still had to hold the remote close to speak. The Cube will hear you from across the room thanks to the eight microphones. You do get a remote too, though.

As well, there is far-field voice control of compatible home entertainment devices. Whether it be your lighting or your Hi-Fi system, as long as it is smart, you can give voice commands. Just like with an Echo or Show, the Cube is a smart hub capable of bringing all of your compatible appliances together.

It comes complete with 4K compatibility, Dolby Vision and HDR 10+. The latter of which is an improvement on the standard HDR 10 support which the Sticks gave us.

Is It Worth It?

It is currently priced at £109.99, which is just over twice as much as the current most expensive Stick, the Amazon Fire TV Stick 4K Ultra HD with Alexa Voice Remote. There are other cheaper TV Streaming devices out there too, which we have reviewed.

There is no doubt you get a lot for the money though. The far-field communication and control is perfect for those who hate remotes (no matter how fancy they are), and it essentially a Fire TV Stick and a smart speaker rolled in to one. When looking at it this way, it is actually great value for money – two separate units would cost more.

However, Amazon representatives have said that it isn’t intended to be a full replacement for the Echo. This is assuming you’ve paired it with a Fire TV stick. So you will still have to hold on to this if you have one already. Customers can also pre-order Fire TV Cube and Ring Video Doorbell 2 together for just £218.99 – a saving of £70.

A few early reviews from IFA 2019 said it struggled slightly with picking up voice commands, but when taken out of a busy environment and into the peace of your living room, we’d say it’ll be just as effective as the Echo.

At the end of the day, there isn’t long to wait now, so it could be worth being patient if you want the latest technology and value for money.

What Else Did Amazon Announce At IFA 2019? 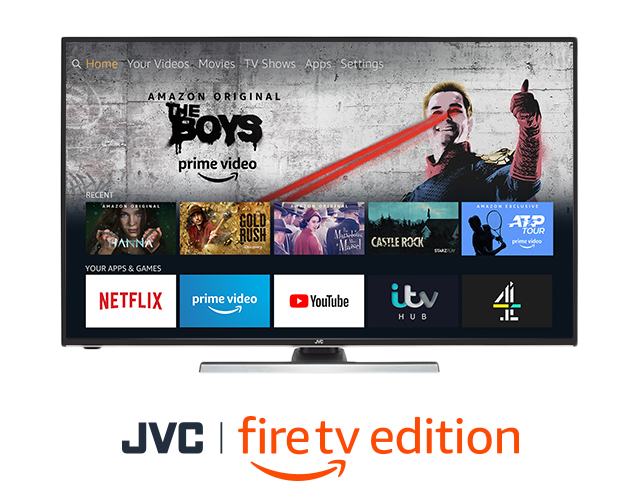 Fire TV built in to the unit rather than in the form of a stick or box? Why have we waited so long?!

This is going to (probably) appeal to fewer of you out there, as it is a whole new telly. And unless yours happens to stop working just in time for the release, a Stick or Cube is probably an easier and more accessible solution to your Smart TV woes right at the moment.

But it does mean you can control the television with your voice without as much as a remote or stick. And they will be available in 40”, 49” and 55” sizes which makes them very living-room-friendly. You will also get the latest in screen technology, with 4K Ultra HD
picture quality.

Oh, and prices start at just £349 – perfect reasonable when compared to everything else on the market.

So actually, in conclusion the JVC Fire TV sounds pretty good. You can currently ask Amazon to email you when the product becomes available to preorder. We will give an update when there is a set time announced.

Your TV probably needs a soundbar. Most modern options just aren’t up to the job of providing crisp sound as well as the picture.

This option combines 2.1 channel cinematic sound with the Fire TV experience. Simply put, it is a standalone sound bar with Fire TV built in. You get the Alexa voice-controlled remote with the purchase so you can control the television with vocal commands, and 4K HDR support so the picture quality will always be the absolute best.

BassUp technology boosts bass frequencies to add extra audio power for those explosive action scenes, and the dual speakers work together with two built-in subwoofers so the sound will fill your room.

The Nebula Soundbar – Fire TV Edition is currently available to pre-order, and will be released on November 21st, 2019.