How To Defrost Your Freezer Quickly

Where would the world be without freezers? Back in the 19th century, that’s where. Think about it. The ability to keep food frozen for long stretches of time drastically reduced food waste and changed eating habits the world over. 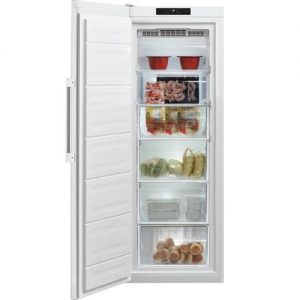 It also allowed us to safely store fresh meats during even the hottest weather. And don’t get us started on the importance of ice cream! Perhaps the most significant change brought about by freezers was that food became many times safer. Food spoilage had always been a major concern and health threat. It was nearly (though not entirely) eliminated because for the first time anything could be frozen for use at a later date before bacteria was able to take hold.

So to say that freezers are important is an understatement. They’re actually a fundamental element of the modern world.

In order to work properly however, they need to be well maintained and that means keeping them clear by defrosting them from time to time. Because defrosting the freezer is as hated as cleaning the oven, we present seven hacks that will make the whole ordeal much faster and easier.

7 Defrost Hacks Everyone with a Freezer Should Know

Without further ado here is our list of 7 practical and proven hacks for defrosting the freezer quicker. 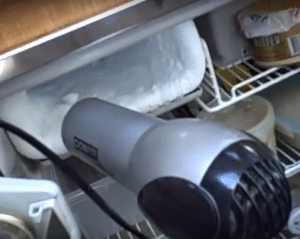 Sure it will cost you a few pennies in electricity but your freezer will be back up and running beautifully in no time. The main concern with this hack is that hair dryers are electric and ice is frozen water and electricity and water… you see where it’s going.

So it’s crucial to use a little common sense when using a hair dryer to speed up the defrosting process. In short, keep the end of the dryer a respectful distance from the ice and concentrate the hot air on opening space behind that ice. As it begins to loosen, gently pry it free without damaging the freezer walls. 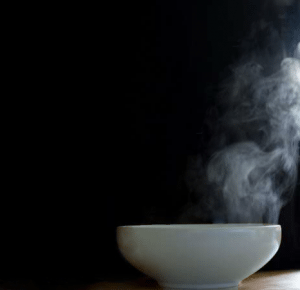 Place several bowls filled with boiling water (be careful) in the freezer and close the door. Replace with fresh boiling water every 10 minutes. After doing this 3 times the steam from the hot water should have loosened the ice sufficiently and you should be able to pry it off the wall without much trouble.

Heat a metal spatula over a flame and then use it to pry the ice away from the walls of the freezer. Be careful though. Don’t scrape too hard with the spatula or you could damage the coils in the wall or even puncture the freezer wall. Make sure you don’t burn yourself by wearing an oven mitt. This may be our least favourite hack but it does work if you’re careful.

Boil some water and put it in a bowl. Dip a rag into the boiling water, remove it and pour some rubbing alcohol on it. Then hold it against the ice to loosen it. Make sure you wear heat resistant gloves and don’t spill the boiling water on yourself or anyone else. This method will cause the ice to melt quicker than it naturally would but should be restricted to removing thin rather than bulky sheets of ice. 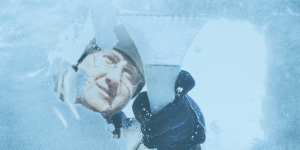 Scraping seems like an impossibly dated way of removing ice but it works so it’s still the most popular method in use today. The key to doing it right is to not lose patience with the process. We know of someone who did and in order to speed things up he reached for his ice climbing axe. The ice axe removed the ice alright. It also put a nice hole in the freezer wall that cost him a pretty penny to have fixed.

This method won’t work as quickly as say the hair dryer but if the kitchen is warm enough it should speed things up a bit. Place the fan in front of the freezer and open the door. Turn the fan on high and wait. The circulating air will speed up the melting of the ice but again, don’t expect miracles. It will still take some time. Once the ice begins to loosen scrape it carefully away from the freezer walls.

Attach the smallest possible nozzle to the hose of your wet/dry vacuum and set the machine to blow. This method is safer than using a blow dryer because the wet/dry vac has no issues with water. It’s also typically a bit faster than the blow dryer.

Once you’ve removed the ice build-up, don’t forget to clean the freezer before returning it to service.

Add a spoon of baking soda to a bowl of hot water. Add a few squirts of dishwashing liquid as well and stir it all up. Then use a sponge dipped in this solution to wipe down the walls of the freezer. When you’re finished, plug the unit back in and let it cool down for half an hour before returning foods for storage.

If your freezer is starting to wear away or you don’t have enough storage space even after scraping away for hours, it may be worth checking out our reviews for a new one…